Nintendo announces Wii U at E3 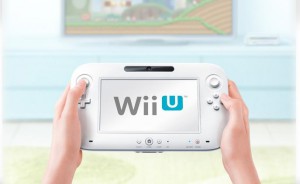 I watched the live stream from Nintendo’s E3 press conference yesterday, and when they showed their upcoming console (or rather, the new controller for it), I was both excited and sceptical.

The name of the new console is Wii U. Yeah, very creative… But I guess it’s as to be expected. The focus for Wii U, as it was with the motion controllers for Wii, is the new controller. I looks a bit like the child of an ipad and an etch-a-sketch if you ask me, with a suitably white Wii-ish look. I’m not going to state any tech specs here, as those are readily available all over the net. My main concern with it is the size. I’m afraid it will be uncomfortable for long play session, but time will tell.

It was good too see that third party developers are already loving it and showing great support for it, that bodes well for the future of this console. Since we are finally getting awesome HD graphics as well, multi plattform games won’t have to be ported to a special low-res crappy version  for Wii U as they often are for Wii (or not ported at all in other cases…). I was also very happy that it will be backwards compatible with all Wii controllers (and games), cause I have a lot of those 😛

So now the question is: will I be so excited about it that I will stand in line for it all night on launch day like I did for the Wii? 😉

This entry was posted in Games. Bookmark the permalink.