Tesla roadtrip – back to Norway from France

My last post got so long that I decided to split it in two. So here’s the tale of our journey back to Norway from France. 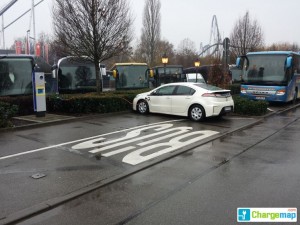 For a little excitement on our way back to Norway, we had planned to make a small detour to Europa Park for some roller coaster fun. The acceleration in a Tesla may come close to the feeling in a roller coaster, but it can’t truly compete with an actual roller coaster ride

So we set the GPS to Europa Park and didn’t concern ourselves much with the route, it was only supposed to be a short 50-something km trip. Not that it wasn’t, but the GPS sure took us the scenic route. I have no idea if there could have been a more efficient road to take, but when we got to the border between France and Germany, we sure began to wonder. Suddenly we were stuck in a non-moving line of cars, and it took us a few seconds to realize it was, indeed, a ferry queue. I had really not imagined there could be a route involving ferries this far from any sea, but there it was. A ferry across the Rhine. Now, after a few seconds of confusion, we quickly realized it was a very short ferry trip of maybe around 100m with a ferry that was just going constantly back and forth, so it didn’t take us very long, and it was free too. But I would have liked to know from the beginning that this route involved a ferry, and if there was an alternate route that did not involve one. Especially considering the ferry did only traffic over during the day/evening, so if we’d been there late at night we’d been stuck. Would the GPS have known and routed us differently? I have no idea. In any case, after some more scenic routes through Germany, we arrived what felt like the back-door way to Europa Park. We had to make a weird 180-degrees turn to get into the usual line into the parking area. Another fun thing was that there was a Type-2 charging station at Europa Park. But it wasn’t inside the parking area like you would think, it was on the inside of a bus-stop. We actually passed it on our way to the parking area, and I wonder if we could have just parked there for free while we charged, but it didn’t really feel safe to leave our car somewhere buses might be driving in and out all the time. And we knew we had enough power left to reach our first supercharger on the way home anyway, since we’d planned for that.

Unfortunately we couldn’t stay the whole day at Europa Park. We had a long drive home, and we both kind of needed to get back to work after a long vacation, so after a few coasters, some ice cream and winning some sort of moose/hippo hybrid stuffed animal shooting basketballs, we set off. For some reason the GPS took us back through the “back-door” way out of the area, and through more tiny German towns before leading us onto the highway. No idea if that saved us any time, we could probably have just gone onto the highway pretty much straight away. And of course, the route planner still suffered from the same jumpy behaviour about what superchargers to stop at, but this time we’d learned how to deal with it. We also made sure we didn’t have to stop at the supercharger in Bad again, and instead stopped in Hamburg this time. By the time we got there, it was getting pretty late, and conveniently the charger was right next to a hotel, just like the one in Denmark on our way south. Of course, it seems every time there’s a hotel, there’s nothing else there, which I find kind of annoying. But instead of stopping to sleep at this hotel like we probably should have, we felt we hadn’t gotten as far as we should that day, so we decided to go to the next one and sleep there. The next leg would take us into Denmark, and I drove that while my husband was sleeping in the passenger seat. I was feeling fine when we left the charger, but after some time on the road, I really regretted it. It was getting increasingly difficult to stay awake, and I kept having to distract myself by pouring M&Ms into my mouth to stay awake. 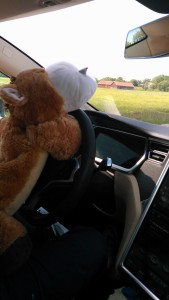 Stand-in driver! Most of the time he served as a great pillow.

When we got to the supercharger in Denmark there was of course no hotel right next to it, and the gas station was closed so we couldn’t even go there for a toilet break. We sat in the car looking for nearby hotels while we charged, picked one and drove over to it. But it didn’t have a night-open reception, so we couldn’t even get in. By that stage, it was getting so late that it was starting to feel pointless to pay for a night at a hotel, and so for some other ridiculous reason, we decided to just power through the night. But after driving for a while he woke me up, totally confused about what the GPS was doing. For some reason it had decided that we needed to turn around and go back to the previous charger to charge more if we wanted to reach the next charger! He was very worried at that stage and didn’t know what to do, so we decided to just stop and look at what was going on. After checking the distances against our expected range, it became clear the route planner had gone completely bonkers. Even setting the next supercharger as our destination didn’t help, we had to actively remove the go-back supercharger stop from the route to get it to shut up about taking the next exit. 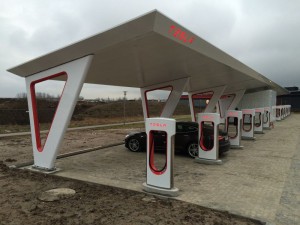 Still some construction work was going on around the area.

We reached the supercharger in Køge very early morning, and both just slept in the car while it charged. This was by far the most elaborate supercharger we had come across in Europe until now, with a Tesla roof and I think a whole 12 chargers. After waking up to an almost fully charged car, we went into the nearby gas station to get some breakfast before we went on to get into Sweden. Having charged so much in Køge we skipped the first charger in Sweden and went straight to the one in Udevalla. Pretty much all through Sweden the route planner kept on about it’s ideas of wanting to take us back to the previous supercharger to reach our destination, but by now we were getting used to just removing that ridiculous charging stop once it popped up.

We didn’t have many more troubles on our way home. A bit of traffic jam on the only section of road since the small-town roads around Europa Park that wasn’t a highway, and at the only supercharger stop in Norway we actually got parked in by a cement truck that was working on filling in around some extra chargers being set up, so we had to wait for them to be done. It was pretty clear we were back in Norway though, as it was filled up with Teslas there, and a line even formed while we were waiting for the cement truck to let us out. All and all we had a fun trip, and it was great to get to test out the car on a more long distance trip, even with all the weirdness of the route planner. It was still very nice to have the route planner and not have to plan the route beforehand. But driving through the night was a bit too exhausting and not something I think we’ll want to do again.

This entry was posted in General. Bookmark the permalink.