Tesla roadtrip – Norway to France and back.

I’ve had my Tesla Model S for about one and a half year now, but the longest trip I’d had up until now was Oslo-Trondheim, which is about 500km, takes about 7 hours and has 2 supercharger stops. This June, I had decided to go to Fanabriques, which is the largest LEGO event/exhibition in France. AFOLs from around France and surrounding European countries gather to show off their creations, and the exhibit had around 15.000 visitors over the weekend this year. To travel to such an event to exhibit LEGO creations is a bit unpractical using a plane, because of having to pack things for survival through airport luggage handling… So we thought, why not make it a roadtrip, and drive the Tesla to France? Well, the number one argument would be that it’s kind of far, and the trip would take us two days. But it would also be an opportunity to test out the supercharger network, and to give my Tesla a chance to unfold on highways with higher speed limits than Norway’s maximum of 110km/h (autobahn, I’m looking at you!)

Now, to go from Norway and down into Germany, there are three main options. Either we take a ferry to the north of Denmark (Hirtshals) and go straight down through Denmark, we take a ferry to the north of Germany (Kiel), or we drive through Sweden, and take the bridge over to Copenhagen and cross through Denmark that way. Because we didn’t want to have to rely on ferry times (the one to Denmark only goes twice pr day, at inconvenient hours, and the one to Kiel only once and is an overnight ferry), we opted to drive through Sweden. This of course meant more hours of driving, but money saved and we wouldn’t have to worry about missing the ferry.

Conveniently, Tesla has released their trip planning navigation which automatically adds in the needed supercharger stops on the way. We were excited to test this out, and didn’t worry at all about planning our trip in regards to what roads to take or where to stop along the way. This trip planning is supposed to remove all range anxiety, and while I’ve never felt any range anxiety in my Tesla since the very beginning, it was nice to know that on such a long trip, the car would make sure we didn’t mess up. Or so we thought…

We input the address to our hotel at the destination in France (Rosheim) and set off. The car decided to pick the same route we had in mind, through Sweden. Just for the record, our route was pretty much this: 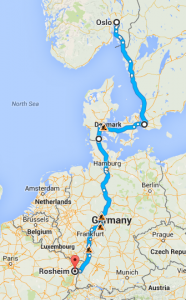 About 1800km. 18 hour driving, if non-stop. The plan was to try and get to, or close to Germany on the first day, find a place to spend the night, and then do the rest the next day. Due to circumstances (coming home from Brickworld in Chicago the day before…) we didn’t start very early, so we would have to drive to quite late on this first day.

But already on our way to the first supercharger, the only one in Norway before going into Sweden, the trip planner started to show some odd behaviour. As we were nearing Moss, it suddenly had the idea that we should take a ferry over the Oslofjord to Horten, and then drive to Larvik to take the ferry I mentioned previously to Hirtshals. Not only that, but it also claimed that we didn’t have enough charge to make it to the next supercharger (which would be in Hirtshals) with this route. Wth? What happened to removing range anxiety? Now, luckily, we knew this route suggestion was ridiculous, and that it involved ferries we didn’t want to take. Because the navigation doesn’t inform about that. The route looks just as if there’s a bridge going over. We tried to get the navigation to recalculate the route, but it just kept insisting on this stupid detour, so we just set the navigation to the supercharger we wanted to stop at so it would stop nagging us about taking the next exit. At the supercharger, we put it back to our address in France, and now it was back on track for driving through Sweden. Initially. After a little more driving, it had discovered yet another ferry. This time from Sweden directly to Denmark, to Fredrikshavn to be more precise. No no no Tesla, we don’t want to be led onto these ferries randomly. Again we just put the navigation back on track with the next supercharger and drove on through Sweden. We thought this would be the last ferry it would be confused about, but no such luck. As we were one our last leg in Sweden, towards Malmö where the bridge to Copenhagen is, it again found a ferry crossing over. This time we were a bit unsure if this was actually a ferry, as our local knowledge was getting thinner. But zooming in on the map showed once again, this was indeed also a ferry.

When we got into Denmark, we were at least happy there would not be any more ferry detours to worry about. At this point it was getting quite late, and when we came to the supercharger in Middelfart at around 1 in the morning, we were happy to discover there was a hotel right there. At any other time of day, we would have been somewhat annoyed, as the hotel was the only thing that was there, but this late, a hotel was just what we wanted.

We still had a little way to go to get into Germany, but we had gotten far enough on the first day that we would be available to get to France not too late in the evening. With the ferry nonsense behind us, the trip planner was being less annoying to deal with. But at this point, it was no longer obvious what the next supercharge would be, as they were closer to each other than in Sweden. The trip planner tells us how long it thinks we should charge at each one to reach the one it deems to be the most suitable next one, which is not necessarily the closest one or the one furthest away but within the car’s range. We don’t really trust that it calculates this with regards to how fast the range will diminish when driving fast on a highway, so we always charged a bit more than it suggested. This brought forward another interesting quirk of the trip planner. What happened was then when we’d be done charging, it would figure out that we could drive to a supercharger further away than it originally had planned for us. The problem was, this would only be possible if driving very economically. Something we didn’t intend (or want) to do at all on the autobahn. What happened then was that it displayed a warning that we needed to drive slowly to reach the destination. Except we didn’t, because there were other superchargers to stop at! When the estimated range left at the destination reach 0%, it finally decided to change the destination to another supercharger. Except it wouldn’t put it to the one before (which is what we were aiming for), but the closest one it could find! It seems that the trip planner calculates what charger to stop at differently when we are driving and not. Once it has settled on a next destination, it will fall back to take us to the first charger on the route if we can’t reach that particular destination, instead of recalculating a more sensible charger to stop at given our actual final destination. So again, we had to manually tell it to navigate to a particular supercharger several times.

Another thing that became apparent during this trip, is that not all superchargers are placed near what I’d consider a logical place for a short break along the way. A logical place would have a place that is open 24/7 (typically a gas station) where one can use the toilet and buy something to drink or snacks, and a place where one can sit down to eat if it’s time for a meal. Many places were like this. There would typically be a fast food b 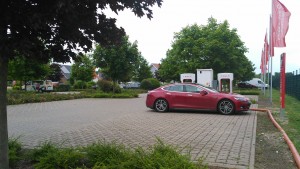 urger place (I’m kind of sick of fast food burgers now…) and a gas station. But some places were not. An example of a place that was not was Bad Fallingbostel. This place had only 2 chargers, and was next to something that looked like a place to view houses one could buy to build. Not exactly what I’d consider a typical place to stop for a bite to eat or a toilet break.

As for driving on the autobahn, there was no question the car was handling speed very well. As Norwegians, we’re not used to drive very fast, so we didn’t try to rival the speed loving Germans or take the car up to the software speed limitation, but we quickly adjusted to driving rather comfortably at between 140 and 160km/h. There is no doubt this eats range at similar high speeds, but we were never worried about reaching the superchargers we needed to, as there were plenty of them along the way. 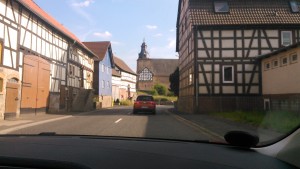 It was also apparent we hadn’t really done any research on the route to take, because on one leg the navigation decided driving on some local side roads that took us through tiny German towns was the way to go. Had we known better, we would never have taken that exit from the autobahn as the navigation was telling us to do.

At the last supercharger stop before our destination, we had to charge enough to be able to go back after the weekend. We were also planning to make a small detour to Europa Park on our way back, so we would need enough charge to make it there and then to a supercharger, as we didn’t know if we’d be able to charge either in Rosheim or at Europa Park. According to our research, there should be a Type 2 charger at both places, but you  never know if those will actually work, or even be available when you need them. So we just calculated how long we would need to drive, and made sure to charge enough adding in some buffer for loss of range while parked and the little driving around we would need to do in France.

The last leg into France was just about 50km, and we arrived at our destination at around 23. Trip planner quirks aside, we had a pretty comfortable trip. Switching drivers at every supercharger stop meant we never had time to get really tired from driving and could rest it out in the passenger seat. We are clearly making more stops than we would have in a non-electric car, but overall that might actually be a good thing, as it makes the whole trip more comfortable.

I have some more stories to tell about our trip home, but I’m going to leave that for the next post, as this one got quite long!

This entry was posted in Tesla. Bookmark the permalink.