Taking my Tesla to the mountains and back 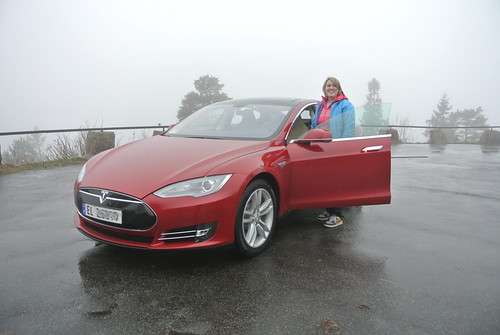 I’ve been driving around in the car of my dreams since November now, a beautiful red Tesla Model S. But driving electric presents some challenges, at least until the infrastructure gets to a point where you don’t have to think about where to charge anymore. One of the ultimate tests for us was if we could use the car to get to our cabin in the mountains, at Skramstadsætra, and back, without any major problems. Last weekend we finally put the car to the test!

So, why was this a challenge? Well, first of all, the distance from our house to where we park the car in the mountain near our cabin is 187km. That doesn’t sound so bad, does it? The stated range of the Model S is 480km, although we all know that’s under pretty optimal conditions. But so far, it doesn’t sound like much of a challenge at all. But then consider this: we have no way to charge the car up there. The parking lot does not have any electrical power. Our cabin does not have electrical power (and is also about a 30min trip on skis from the parking lot during winter). Actually, there are no available chargers anywhere in the area. Ok, so, fine, that just means we have to make the roundtrip on a single charge. 187*2 = 374, which is still well within the stated range, so all should be fine, right? Next detail: we’re in Norway. Norway isn’t exactly flat. So it’s not just the last part of going up the hill to the parking lot that is going to put a strain on the battery, it’s the entire trip of basically going up and down mostly all the time.

Well, challenge set! So we charged up the battery to 100%. The typical range when we started our trip was 396km (which was, kind of disappointingly, lower than we had expected, but this range calculation might be influenced by our daily driving, I’m not sure). We put the car in range mode to save some energy on the climate control (although the car still kept a good climate) and set off. Luckily, our skis fit inside the car, so no range would be lost to having to mount a roof rack

On our way there, we didn’t really think all that much about economizing energy. We felt pretty confident that we would be able to get far enough back towards Oslo that we would be able to reach a charger if need be. But we still drove far more economically than usual, not pushing the car’s limits on the highway, and trying to flow with the terrain and not speed past slow going cars. The last bit up the hill of course sucked a lot of range from the battery, but we figured we might recover some of that going back down again. The verdict when we parked the car: 198km of range left. Ok, so we had used pretty much exactly half of it. Confident that it would not be a problem getting back, we put the car in energy saving mode (hoping it wouldn’t consume much energy just standing there), took our skis and went up to the cabin. 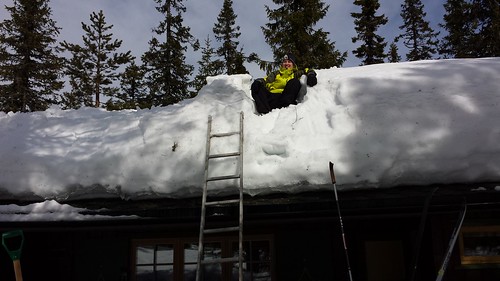 There was quite a lot of snow up there!

Two days later, before heading back to the car, we checked the app and were disappointed to see that two days parked in not very cold, but still sub zero temperatures at night had decreased the range to 175km. We debated pre-heating the car to get the battery warmed up and thus be able to regenerate more on the way down, but we weren’t sure if it would be worth it overall, so we didn’t. Instead we noted the address of the nearest chargers compatible with the Model S, one 142km away, and one 166km away (yes, we really were in a charger desert. There is one closer, at 43km away, but that is Chademo, which there isn’t an adapter for yet). As we started going down the hill, with almost no regenerative capabilities, we were lacking 9km of range to get home. However, we decided to make it a challenge and try to get home without having to recharge. We set the navigation to our home address so we could keep track of the distance left and compare that to the estimated range left, and started slowly going down the hill in order to regenerate as much as possible with a cold battery. To our surprise, as we were nearing the bottom of the hill, the range had actually gone up to 180km, possibly due to a warmer battery recuperating some energy. So in a very short time, the range and the distance left to travel was getting closer to each other. Once on the main road we just kept to the speed limit, which was going to be between 60km/h and 80km/h for the most part until we reached the highway nearer to Oslo. We had tried the cruise control for a bit going the other way, but quickly decided that I was doing a better job at conserving energy 😉

We took great pleasure in seeing that the difference between the range left and the distance left kept increasing, and started to really believe we wouldn’t have to stop to recharge. But we also knew that once we reached the highway, we would have to go below the speed limit of 100km/h to be sure to reach all the way. Since we also live on a hill in Oslo, we needed some slack to get all the way there too 😉

On the highway we found a truck that was doing an average speed of about 90km/h and decided to just stick behind it (at a safe distance of course). It was a bit painful to be in a sports car and not zip by trucks and other slow-going cars, and even more painful to be passed by another Model S, but it was also fun to see that we were succeeding in our challenge.

The result? We parked the car with 44km of range left! The roundtrip on one charge was a success. The car passed the test

We never felt any of this infamous range anxiety, we only felt more and more confidence that the car was up to the challenge, and it wasn’t like we had to drive super slowly either. Just a little bit under the speed limit on the highway. We also never turned off the heating, or the internet radio or anything else. In overall lost time on a 2 hour trip, it was probably 10 minutes, much less than we would have had to stop for a charge if we had been going faster. Average energy used for the entire trip was 167 Wh/km, although it was significantly less for the return trip only. The average for the last 50km said 140 Wh/km when we parked. Plus, the car is such a breeze to drive, whether I’m treating it as a sports car, or an electrical car in need of range conserving gentle handling. I love my car 😀

This entry was posted in Gizmos and tagged tesla. Bookmark the permalink.

One Response to Taking my Tesla to the mountains and back